Let yourself be inspired

Read through the exciting experiences, reports and interviews. We have made 7 categories for you below. Click on a category to see the content. We have linked everything there for you.

Peace to you
This document is a collection of texts around the story of Robert Power/Casper on death row in Florida. Casper wants to apologize to his victims, many of them being rape victims. His Swiss penpal and friend tries to help him get his apology out. When Casper writes his biography, dealing with the details of his crimes becomes one of the biggest challenges Ines has ever faced. After Casper dies of cancer, she meets one of the rape victims who has forgiven him.
The brochure contains dialogues with Casper, his handwritten apology, an interview with his rape victim and other texts. The preface is written by Bill Pelke, the president of Journey of Hope.
English, Version of May 14th 2015, by Ines Aubert

Interviews with members who joined lifespark only after writing to an inmate that they didn’t find through lifespark
Seven lifespark members in different countries answer questions about their membership in lifespark
English, August 2014, by Ines Aubert

A piece of normality
The story about a penpalship between a Anna-Lena Gruenagel, a German woman and an American inmate on death row in Florida and about how Anna-Lena deals with emotional stress day by day, just to color a man´s cell with life.
English, August 2013, by Alexandra A. Nemeth (blog)

Being a young pen pal
Interviews with members who started a penpalship at a very young age.
English, September 2012, by Elisabeth Deutscher

Life is like a box of chocolates
English, August 2012, Sabine Townshend

Lifespark – lifeshare
“You came into my life out of the blue”
lifespark members and their penpals on death row write about their penpalships
English, October 2011, Penpals

My penpalship with Leroy Bockover in Potosi, Missouri
English, May 2006, by Ines Aubert

Interview with an inmate who is no longer on death row about prison gangs
English, Interview with J. in Texas, February 2015, by Ines Aubert

My visit with Raymond
English, by Anne-Marie Simonet, Spring 2016

Visitation Situation in the U.C.I. in Raiford, Florida
English, by Katrin Heitzer, June 2007

My first visit ever at Polunsky Unit
The text presents extracts of lifespark member Christiane Bitz’s diary, when she travelled for the first time ever to the USA. The trip took her to Polunksy Unit, Livingston, Texas to visit her pen-pal Roberto, prisoner on the Texas death row.
English, by Christiane Bitz, May 2003

Talk about the topic execution with Robert Pruett on death row in Texas
English, by Ines Aubert and Robert Pruett, July 2014

Dialogue with Lilia Allemann
Lilia served as spiritual counselor to her penpal when he was executed.
English, by Ines Aubert, January 2014

Interview with Gabi Uhl
Gabi Uhl is an anti-death penalty activist who watched the executions of two of her pen pals.
English, by Ines Aubert, June 2009

A Journey to Solace
José A. Moreno wrote this article after coming as close as three hours to his execution. This horrifying experience has changed him completely: “The person that went to the Walls Unit is not the same person that came back…”
English, by José Angel Moreno, Texas Death Row – September 2007, submitted by Hari Ammeter

The Ride
Kevin Zimmerman, Texas death row prisoner no. 000977, wrote the following text after having received a stay of execution 15 minutes before execution time. The stay was cancelled a few days later and Kevin got executed on January 21, 2004, abruptly stopping a long time pen pal-ship with a lifespark member.
English, by Kevin Zimmerman, December 2003

Forgiveness
A text by Robert Pruett on death row in Texas about forgiving his father.
English, submitted by Ines Aubert, June 2014

Talk with Jake Yarbrough – a living memory of a taken father
A talk with the son of the victim in the case of Robert Pruett.
English, Ines Aubert, September 2013

Interview with Debbie
An interview with Robert Power’s rape victim who has forgiven him.
English, Ines Aubert, February 2011

The big challenge
A talk with Robert Power on death row in Florida who wants to apologize to his victims.
English, Ines Aubert, October 2010

“It was a healing process for both of us”
An interview with Rodney Bowser, who forgave his sister’s murderer.
English, by Ines Aubert, June 2007

An interview with Bill Pelke, founder of the Journey of Hope
English, by Ines Aubert, February 2007

Solitary confinement does get overwhelming and it’s easy to fall into deep depression and lose hope. It’s a constant battle for peace. I know “battle for peace” sounds like a war. I believe in a way that we are in a war. A war for fair treatment, to be seen as human, and a war with the person inside of us that is a pessimist.

When a person is convicted and then sentenced to death so many thoughts and emotions go through their mind. It is almost like you are grieving. But it is a completely different type of grieving. It doesn’t matter if you are a person who is really innocent or really guilty. The mental process takes a whole new sequence.
The process begins with shock. You are shocked you’re life is going to end. Everyone knows at some point they will die. But before you come to death row, that’s a mystery. If the state or federal government has their way, you actually know the date and time you will be dead. Let that sink in.

While your first few months on death row drag on, you are lucky if you meet your new lawyers in person. You take time blaming your trial lawyers. Most likely the people who were by your side prior to the conviction have left and you will never hear from them again. The saying “Out of sight, out of mind” really applies to people on death row. Either people from your past are to embarrassed to be associated with you, or they purposefully forget about you. Either way, unless you are somehow able to be one of the lucky ones who have people who stick around, you’re most likely to go about the hell alone.

This is what my life has turned to since April 2016. That is the day I was sentenced to death by Judge Joyce Kimbler in Medina County Ohio. I was convicted of a crime I did not do. I was convicted based on all of my past wrongs I did in my life. I was never convicted on evidence of this crime. In fact evidence related to this crime that was presented at trial, shows I did not even do this. But because improper other acts evidence littered my trial with prejudice and bias, I was convicted. I even had someone who worked with the prosecutor on the jury.

My name is James “Jimmy” Tench. I am currently 36 years old on death row in Ohio. I was 27 at the time this crime happened, and 30 when I was convicted and sentenced. I spend every moment, of everyday working to get my conviction overturned. I am stead fast and headstrong in my fight to make sure real Justice is served for the victim in this case. Mom, I promise I will never stop fighting for that.

How an embarrassing case becomes a godsend for justice in Texas
English, by Jacqueline Mellana, April 2006

a card for Mother’s Day from a penfriend 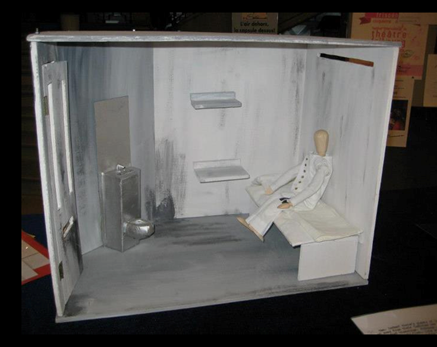 lifespark’s model of a cell on death row